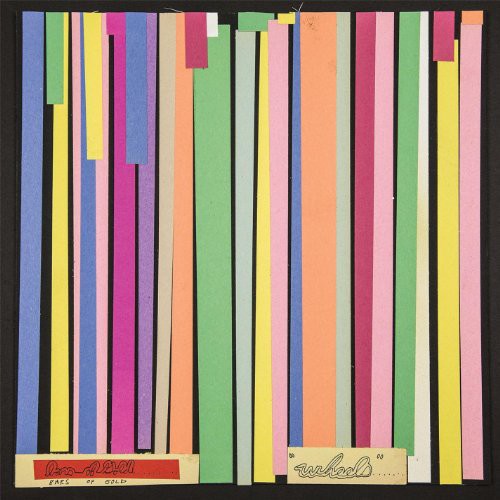 Wheels [LP]
Artist: Bars Of Gold
Format: Vinyl
New: Not on Hand, Let us get it for you
Wish

From ALLMUSIC: You just can't beat a band with a good lunatic in front of the vocal mike, and Bars of Gold have a great one in Marc Paffi, who used to front Bear vs. Shark and on a good day sounds like the grand, unholy spawn of Jon Spencer, David Yow, and Eric Burdon. Paffi's inspired stream-of-consciousness bellowing on Wheels, the second full-length album from Bars of Gold, is so impressive that it takes an extra spin or two to soak in just how great the rest of the band is, but the results more than reward the effort. The guitar work from Ben Audette and Scotty Iulianelli leaps back and forth from deft prog-influenced picking to full-on post-punk crunch and hits it's mark every time, while bassist Nick Jones (who, like Audette and Iulianelli, was a member of Wildcatting) and drummer Brandon Moss (like Paffi, a veteran of Bear vs. Shark) lay out some muscular grooves that push the songs forward and punctuate the fury of the music with a precision that's bracing and plenty fun. There's a lot going on in these songs, with anything from soul-gal backing vocals to tinkling keyboards lurking in the background while the band lunges into attack formation, but when the gears all mesh and this music hits fifth gear, Bars of Gold sound like a crazy, unstoppable force with the might of a freight train, and the best songs (like 'Coffee with Pele' and 'Tree Fort') are mighty slabs of dangerous joy. Recorded with admirable clarity and impact by Chris Koltay, Wheels is a stone blast in every sense of the word, and one of the smartest, wildest slabs of rock action in recent memory. From STEREOGUM.COM - Written by Chris DeVille: Michigan quintet Bars Of Gold makes distinctly urban music, but not in the sense that "urban" has become synonymous with hip-hop or the retro garage clatter that earned the nickname Detroit Rock City. Nor does it have much to do with techno's drum machines or Motown's matching suits and four-part harmonies. Some of that ruckus is in the mix - rough-hewn rhythms that hit hard, preternatural melody delivered in untamed howls, wanton guitar detonation - inasmuch as a city's musical history tends to infect it's residents' sonic output. But when I say Bars Of Gold sounds urban in a Detroit kind of way, I mean their music seems to have been constructed from busted-up factory steel and cement splattered with neon-golden chemical waste. It crushes, it scrapes, it glows. Constantines, the Ontario post-punk band often described as Fugazi-meets-Springsteen, are probably the closest reference point, but with Bear Vs. Shark's Marc Paffi out front pushing his gruff bellow to a harrowing breaking point, it's more like Constantines as fronted by Tom Waits. Les Savy Fav fans will also resonate with the combination of jagged guitar figures cheered on by art-damaged groans and growls. Wheels, the album they're releasing 10/29 on Detroit's Bellyache Records, charges ahead with workingman's precision and balls-out bluster. Produced by Chris Koltay (Akron/Family, the Dirtbombs), it is the sound of instrumental math-rockers meeting up with a mad man and cutting loose like rock 'n' rollers. Bars Of Gold came together in 2008, when Paffi received an invite from former Bear Vs. Shark drummer Brandon Moss to jam with his instrumental quartet Wildcatting. The emphasis instantly started to shift from brain to heart, from riffs to songs, though 2010 debut Of Gold only hints at the heights they'd ascend to with Wheels. As Paffi tells it, "At first it was those guys doing their crazy Led Zeppelin instrumental stuff. Battles, that kind of thing. But with Wheels we're starting to come into our own a little bit more as a five-piece as opposed to a four-piece plus a singer." Many bands ease into powerful chemistry over time, but it's notable that Bars Of Gold managed to mature into a powerhouse even after Moss moved to Washington, D.C. in 2010. As a result, writing songs involved special arrangements like Skype sessions and generator-powered Pennsylvania cabin recording sessions. Even a simple gig at a dive bar required logistical juggling. "It was definitely a struggle for sure," Paffi says. "He was flying back and driving back for shows. It was a long process... Definitely much longer than we would have liked." Still, despite the hassles inherent in having a member of your band nine hours away, the thought of subbing in a different drummer was never considered. "If there's ever a point where one of us has to bow out," Paffi says, "we're going to be done." That solidarity extends to Bars Of Gold's family-first weekend warrior policy. Wheels is, in large part, about navigating that transition from reckless youth to responsible adulthood and the settling down that often comes with that. Thus, no gargantuan tours are in the works to support Wheels. But Bars Of Gold is far from retirement. Now that Moss moved back to Michigan last year, the band plans to kick out the jams at a quick clip. They hope to have a new 7-inch out before the end of 2013; check Bandcamp for new developments. In the meantime, enjoy some Wheels previews below including the previously posted "Blue Lightning" and, for the first time, album opener "Hey Kids," a master class in nervous tension and euphoric release.