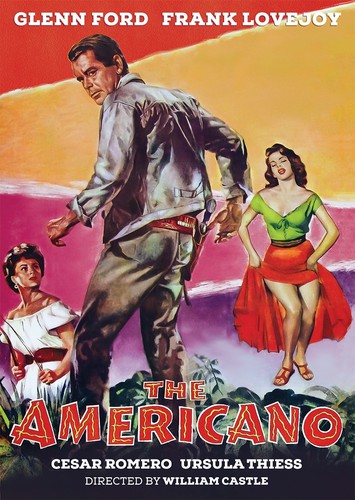 Glenn Ford (3:10 to Yuma) stars in this modern day "south-western" as Sam Dent, a rancher who travels to South America to deliver a cargo of valuable Brahma bulls to a Brazilian rancher only to find the buyer has been murdered. Cesar Romero (Coney Island) co-stars as a dashing and jovial bandito, "El Gato" who becomes Sam's guide and friend. Also co-starring Frank Lovejoy (Retreat, Hell!) as an unscrupulous and homicidal land grabber, Bento Hermany who offers Sam a job as his Ramrod with strings attached. And just when we thought things couldn't get more complicated; Sam finds himself caught between the loves of Teresa (Abbe Lane) and Marianna (Ursula Thiess). Those are merely the human obstacles; there are also piranhas, deadly snakes and other jungle predators to contend with. Luxurious cinematography shot on location and in Technicolor by William E. Snyder (The Loves of Carmen) and featuring the music of legendary bandleader Xavier Cugat. The Americano was one the few larger-budgeted directorial efforts by exploitation king William Castle (The Tingler).
back to top