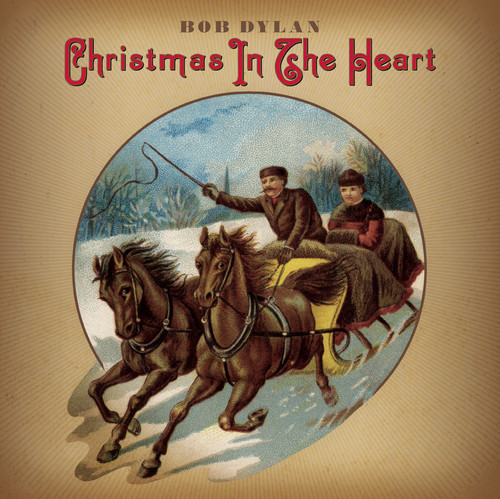 Christmas in the Heart
Artist: Bob Dylan
Format: CD
New: Not on Hand, Let us get it for you
Wish

2009 holiday release, the first Christmas album from the legendaryFolk/Rock singer/songwriter. Christmas In The Heart is Dylan's 47th album and follows the worldwide success of his album Together Through Life. In a commitment to ending hunger, all of Bob Dylan's U.S. current and future royalties from sales of Christmas In The Heart will be donated in perpetuity to Feeding America, guaranteeing that more than four million meals will be provided to over 1.4 million people in need in this country during this year's holiday season. 15 tracks including 'Here Comes Santa Claus', 'Winter Wonderland', 'Have Yourself A Merry Little Christmas' and many others.

After the initial shock fades, the existence of CHRISTMAS IN THE HEART seems perhaps inevitable. After all, the thing Bob Dylan loves most of all are songs that are handed down from generation to generation, songs that are part of the American fabric, songs so common they never seem to have been written. These are the songs Dylan chooses to sing on CHRISTMAS IN THE HEART, a cheerfully old-fashioned holiday album from its Norman Rockwell-esque cover to its joyous backing vocals. Apart from the breakneck "Must Be Santa," which barrelhouses like a barroom, Dylan doesn't really reinterpret these songs as much as simply play them with his crackerjack road band, dropping in a little flair -- restoring "we'll have to muddle through somehow" to "Have Yourself a Merry Little Christmas," singing the opening of "O Come All Ye Faithful" in its original Latin -- but never pushing tunes in unexpected directions. Many would argue having Dylan croon these carols is unexpected enough and, true, there are times his gravelly rumble is a bit pronounced, but nothing here feels forced, it all feels rather fun, provided you're on the same wavelength as latter-day Bob, where the sound and swing of the band is as important as the song, where there's an undeniable nostalgic undertow to all the proceedings. And, of course, there's no better time for celebratory sound, swing, and nostalgia than the holidays, which may be why CHRISTMAS IN THE HEART is a bit of a left-field delight.

Rolling Stone (p.80) - 3 stars out of 5 -- "Dylan's singing is often nimble and clear -- he goes high in 'The First Noel' without a hint of gravel."
Pitchfork (Website) - "CHRISTMAS IN THE HEART is a surreal and occasionally rousing collection of gooey holiday ballads, complete with animatronic backing vocals and Nashville-smooth arrangements."