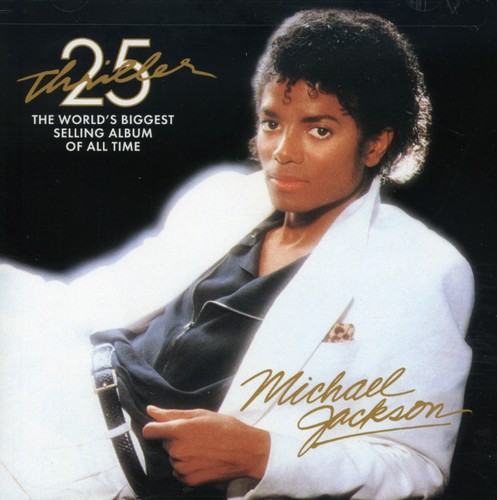 The Biggest Album Ever just got bigger. The 25th Anniversary Edition of Thriller celebrates this ground-breaking album with 7 bonus tracks, six of which are previously unreleased. The new tracks include exclusive remixes from Kanye West, Fergie, will. I. am and Akon along with a previously unreleased track from the Thriller sessions, "For All Time, " newly mixed and mastered by Michael Jackson. Also included is a BONUS DVD with new, digitally restored versions of the three videos from the album as well as the Michael Jackson's groundbreaking performance of "Billie Jean" on the "Motown 25: Yesterday, Today, Forever" television special (first broadcast on NBC May 16, 1983). Also included is a new personal greeting from Michael Jackson to his fans penned exclusively for this special release.

Who was the handsome devil on the original cover of this album? So smooth and self-assured, mischievous black silk beneath dapper white suit. And do you remember the special edition that came out in 2001, with the alternate cover of MJ hugging a baby tiger? Dear god, it's no wonder this album has sold over 100 million copies worldwide! This cover is obviously just as radical, Jackson surrounded by video zombies, and the content rules too. You naturally get all eight of the bonus tracks included in the special edition, not to mention the previously unreleased "For All Time" and four will.i.am remixes, alternately starring Akon and Kanye West. (Chris Brown must be pissed.) If there's a better vehicle out there to prepare Jackson for his long-overdue comeback, we can't conceive of it. Oh yeah, you also get a video-heavy DVD with Jackson's first ever live performance of the moonwalk. What more can you ask for' other than the last 15 years of his life to never have happened?