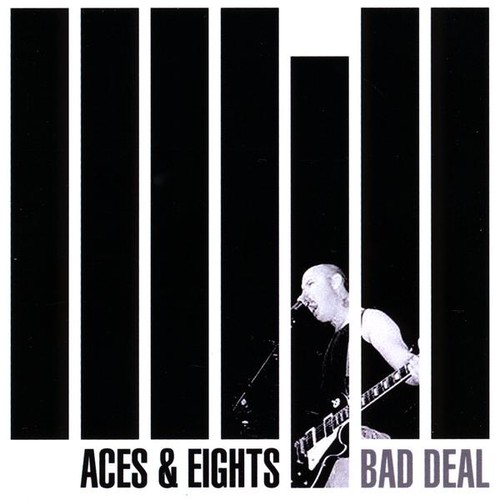 Bad Deal
Artist: Aces & Eights
Format: CD
New: Not on Hand, Let us get it for you
Wish

Aces & Eights was formed in early 2002 in Boise, Idaho, USA. Like many burgeoning bands we gigged around a bit, played a few shows here and there but didn't really come into our own until our first album 'Bad Deal' was released in 2006 followed by a short west coast tour that same year. Over time, the sound had changed dramatically from hard and fast street punk to something a bit more traditional sounding in the rock 'n' roll genre, drawing on influences like Rose Tattoo, early AC/DC, Motorhead, Ducky Boys, Hudson Falcons and others. We crafted our sound based on what we wanted as a band and musicians into what felt right when writing and composing our new songs and music. After more gigging around the Northwest and going through a number of member changes we finally took a small break in early '07 to regroup and tend to our personal lives, including welcoming a number of new additions to our families, starting businesses, etc. After a number of months, though, it became apparent that the line-up would have to change and with the addition of Josh Shockey on rhythm guitar, J. Turner on bass, and Rene Ramirez on drums the song writing again hit a steady pace and the band became more productive than ever. Now after nearly a year of hard work, the album, 'A Different Animal' is due to hit the streets in August of 2009.