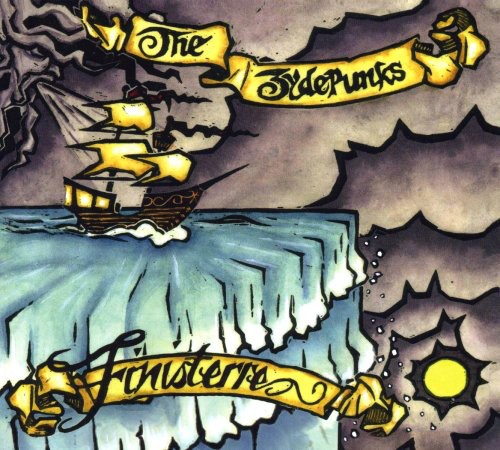 Finisterre
Artist: Zydepunks
Format: CD
New: Not on Hand, Let us get it for you
Wish

'Everyone jumped for joy to the speed-core melange of klezmer tornadoes, Balkan dances, Celtic reels and bayou-squeezbox war' Rolling Stone 'World music never sounded like so much frantic, frenetic and sweat-soaked fun.' Hal Horowitz, Creative Loafing Atlanta 'The Zydepunks are one of New Orleans' most rousing live performers... they surprise with sublime accordion-fiddle fueled playing.' Offbeat Magazine Innovators, rebels, and survivors. Despite the turbulent times in Louisiana's recent history, the Zydepunks have grown from their New Orleans home to be a regional and international phenomenon. Yiddish riddles, Irish ballads, Cajun punk, and vocals in six languages are a small demonstration of why they astound new audiences. Wild folk dances fronted by accordion and fiddle and backed by relentless drums and bass are a testament to the high-energy folk-punk dance craze that is a Zydepunks show. The Zydepunks' new release FINISTERRE is the culmination of years of musical experience and the honing of their unique folk/punk sound. With FINISTERRE, the Zydepunks are releasing an album featuring original material that draws from their various folk influences and punk rock roots. Slavic rhythms, French melodies, songs in three languages (Spanish, English, French) and punk rock beats combine with often dark lyrics reflecting their experiences from the last few years, while tracks written by drummer Joseph Lilly break the folk boundaries and push the band into an entirely new sound. Echoes of New Orleans' tumultuous times appear in 'Long Story Short' and 'Song For Mike', both dedicated to Michael Frey, a friend to the band murdered in 2006. 'Dear Molly' was written while the band was evacuated in North Carolina as a song of longing and dispossession. 'Por la orilla del mar' combines traditional Ecuadorian song with Slavic melodies in a story about a man being forced to leave his home to search for a new life - a story about immigrants from South of the border and Louisiana's own diaspora. Produced by the Zydepunks at New Orleans' Piety Street Studios, musicians featured on the album include a who's who of the Louisiana music scene: bassist Alan LaFleur (from the Grammy-nominated Lost Bayou Ramblers), cellist Helen Gillet (Wazozo), violinist Matt Rhody (New Orleans Jazz Vipers/Hot Club of New Orleans), guitarist Stix duh Clown (My Graveyard Jaw), singer Meschiya Lake (Loose Marbles), violinist Frank Scully, and cellist Aubrey Freeman (Why Are We Building Such a Big Ship) all made valuable contributions to the album.