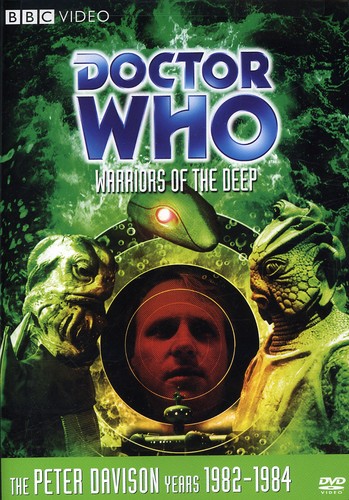 These human beings will die as they have lived-in a sea of their own blood! The year is 2084, and two power-blocs are poised on the brink of war. Using a series of undersea complexes and deep-space satellites, each bloc carefully monitors the other's movements, slowly edging towards the moment when one will launch an all-out nuclear attack on the other. Arriving on Sea Base Four, the Doctor, Tegan and Turlough are rapidly drawn into the web of intrigue which enmeshes this era's paranoid political maneuverings. Not everyone on board the base is working for the same team, and the officer directly responsible for implementing the bases nuclear capability has died in mysterious circumstances. Amid this already tense atmosphere, the crew of Sea Base Four faces an even greater threat to mankind. The Silurians and Sea Devils, prehistoric reptile men who went into hibernation millions of years before, have re-awoken and intend to launch another attempt to reclaim the Earth from humanity. The Doctor must tackle enemy sabotage and face the Myrka, a giant marine monster. But can he prevent the Silurians from implementing their final solution - launching the missiles to start a war that threatens to wipe out the human race?