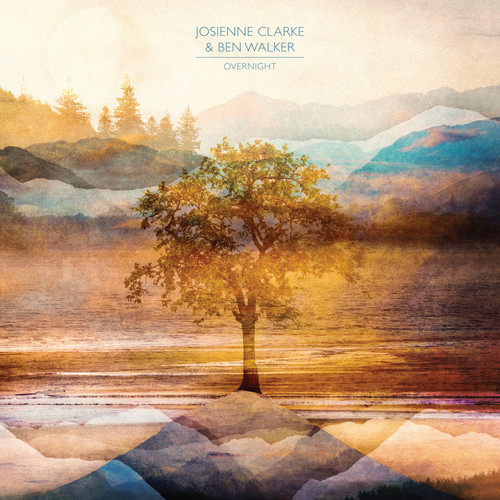 British duo Josienne Clarke and Ben Walker have built up a following in their native country over the past five years with their at once fresh and timeless folk-rock sound and dynamic live performances. Overnight is their first LP for Rough Trade, following up their Through The Clouds EP, which Stereogum called “magnificent,” praising Clarke’s “gracious vision and keen melodic vision.” The ambitious Overnight focuses on Clarke’s magnificent voice and lyrics alongside Walker’s prodigious guitar-playing and arranging; the album features panoramic orchestration by an eclectic core of acclaimed musicians, including strings, horns, piano, double bass, and drums. The twelve songs – ten originals and two covers - recorded almost entirely live at renowned Rockfield Studios in Wales - serve as a snapshot of the endless cycle of night into day and back again, morning light, into dusk, into black midnight, into greying dawn, and on, and on. Album highlights include the stunning country/soul ballad “Something Familiar” and their marvelous take on Gillian Welch’s “Dark Turn Of Mind,” the eerie folk of “Dawn Of The Dark” and “The Light Of His Lamp,” and the traditional-leaning “Sweet The Sorrow” and “Weep You No More Sad Fountains,” the latter a traditional English ballad set to song. “The Waning Crescent” uses the sound of ’50s and ‘60s space-race era pop to play upon its lunar theme. Though Clarke & Walker’s previous work is very much steeped in the folk tradition – the two in fact won the BBC Folk Award for Best Duo in 2015 – Overnight draws just as much inspiration from more-straightforward 1970s AM radio rock like Fleetwood Mac or Neil Young as they do from folk-rockers like Fairport Convention or Joni Mitchell.