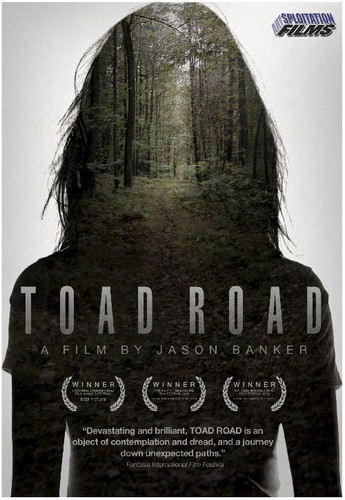 A different kind of American independent horror film, Toad Road - from Executive Producer Elijah Wood and his genre-themed production company Spectre Vision - is a hallucinatory and hypnotic odyssey through mutating realities, drug use, urban legends, and nightmares. Imagine a fusion between the sexually candid naturalism of Larry Clark or Harmony Korine, and the backwoods creep-out of the Blair Witch Project, and you'd be halfway there. Stuck in a dead end town, young James kills time with his druggie friends, engaging in debauched chemical intake to the point of unconsciousness, until he meets Sara, a sweet new arrival to their group. However, Sara wants James to take her further into the world of narcotics experimentation (just as James was contemplating abandoning this lifestyle)... and she also wants him to introduce her to the sinister local legend of Toad Road, a spot deep in the forest that is apparently home to the Seven Gates of Hell. Writer-director Jason Banker's fiction feature debut is an enigmatic and unique fusion of improvisational realism undoubtedly influenced by Banker's work as a documentary filmmaker, and otherworldly, haunting rural terror. Unlike any other film you'll see this year, Toad Road is mesmerizing.