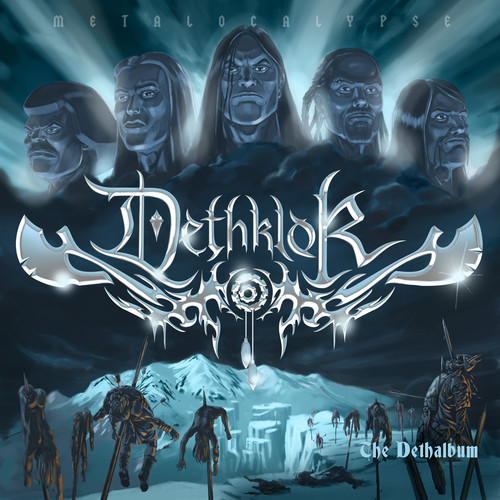 Metalocalypse: Dethalbum
Artist: Metalocalypse Dethklok
Format: CD
New: Not on Hand, Let us get it for you
Wish

Premiering last year on Adult Swim, METALOCALYPSE centers around the exploits of the biggest, most metalist band in the world, Dethklok. As the band goes about their business, the evil Tribunal tries in vain to stop Dethklok from expanding their empire. Each episode features a new song from the band, and now the best of those tracks have been expanded, re-recorded and put together with all.

''The Dethalbum'' is the debut album by virtual band Dethklok, from American animated sitcom ''Metalocalypse''. It was released on October 25, 2007. The album features full length songs from the TV series, as well as previously unreleased tracks. Antonio Canobbio contributed the artwork for the record.

The deluxe edition of the album includes an additional disc that features 7 bonus tracks, the video for "Bloodrocuted" & the first ''Metalocalypse'' episode of the second season.

"Hatredcopter" was released prior to the album's release on the European edition of the Saw III Soundtrack.

The album debuted at number 21 on the ''Billboard'' 200 chart, with 33,740 copies sold in its 1st week. ''The Dethalbum'' was also streamed 45,000 times when it went live on AOL Music during the week of its release. The album was the highest charting death metal album in the history of the Billboard 200, before Dethalbum II overtook it. An earlier, shorter version of the song "Thunderhorse" is featured on Guitar Hero II. It is used in the game without the extra vocal effects such as echo that were in the final version.

A tour band headed by Brendon Small was used to promote the album, using session metal musicians. They have also provided music videos that are remade specifically for concert performances, although they were later released on a DVD included with the special edition of ''Dethalbum II''.

In July 2008, Williams Street began selling a vinyl version of the Dethalbum on their online store. This version contains every song from the standard album, along with the "Gulf Danzig" remix of "Go Into the Water." - Wikipedia