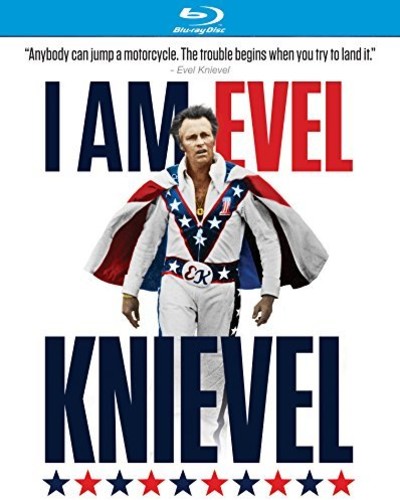 I Am Evel Knievel
Format: Blu-Ray
New: Not on Hand, Let us get it for you
Wish

Evel. Not a name that you forget. Not a man that you forget. Hell, he wasn't a man, he was a daredevil. Evel was the original daredevil. He left behind a twisted wreck of a life and a story that can only be told at full speed, straight up, and with no flowery prose. We will look back, and we will look inside. With a cast that includes those who were there, those who wanted to be Evel, and those who became who they are today because of one man who paved the way for those that risk it all. Interviews include Matthew McConaughey, Michelle Rodriguez, Kid Rock, Guy Fieri, Robbie Maddison and a host of family, friends and collaborators.This is the inside story of the one who gave birth to the culture of extreme. We will reveal what it was like to chase the dream alongside the greatest daredevil who ever lived. Combined with original exclusive interviews, I Am Evel Knievel will weave in archival footage of this bigger than life character to tell Knievel's incredible story, with footage of Evel's greatest jumps from Snake River Canyon to Caesars Palace. We will travel America to revisit the sites of Evel's greatest glory, and to meet the most important people in Evel's life, from small town to big city. From the site of Evel's most infamous jump in Idaho's Snake River Canyon to Montana's Butte Trailer Park where Evel raised his family while scraping together a living. From the world's most renowned stadiums to dusty parking lots where Evel Knievel's death defying feats astonished the world, and left the skid marks of hard living on all those who ventured forth with him.