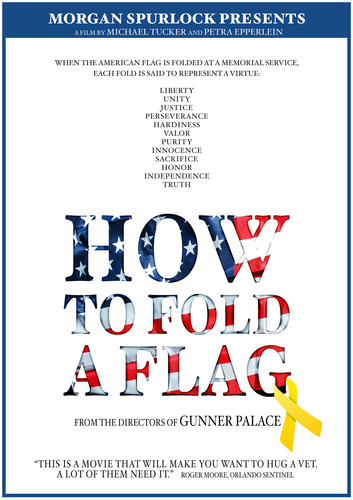 How To Fold A Flag
Artist: Jon Powers
Format: DVD
New: Not on Hand, Let us get it for you
Wish

Five years after filming the now classic Iraq War film Gunner Palace, directors Michael Tucker and Petra Epperlein turn their focus on America and follow the same soldiers home as each struggles to define their wartime experience in a country largely indifferent to their service. In North Carolina, Javorn Drummond works at a hog processing plant at night while he finishes his college degree on a dwindling GI Bill. In New York State, Jon Powers returns to his rustbelt hometown and decides to make a run for US Congress. Out in Colorado, Stuart Wilf, the unit's class clown, tries to resume the life he had before the war, while moving between low-wage jobs and comforting his mother who is preparing to send another son to war. Down in Texas, Michael Goss, a career soldier who was unjustly discharged from the army after two tours in Iraq due to his PTSD, seeks redemption in the ring as a cage fighter. In the Pacific Northwest, the Colgan family, whose son Ben was the first Gunner killed in Baghdad, quietly keep the memory of their son alive while the 2008 Presidential Election loudly unfurls.