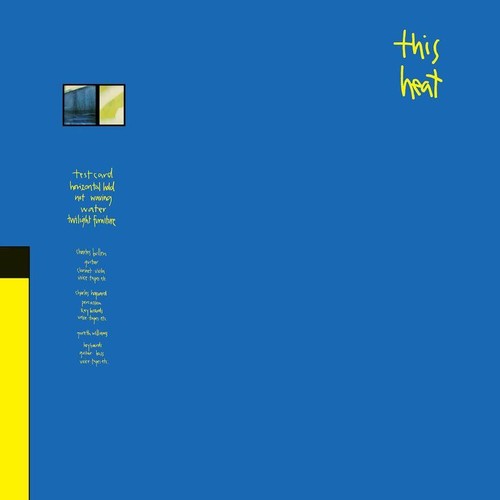 This Heat (Gate) [Remastered] [Reissue]
Artist: This Heat
Format: Vinyl
New: Not on Hand, Let us get it for you
Wish

Second Pressing. First official vinyl re-issue in collaboration with original band members Charles Bullen and Charles Hayward. 24 bit/96 kHz re-master from original analog tapes. Housed in a tip-on jacket. Includes booklet with track notes and archival photos. Isn't it so often the case that the most innovative works of art - the ones that break the ground where others follow - are the ones that seem to reach only the ears of those who take those ideas and run with them? So it is with This Heat and their eponymous debut album frequently referred to as 'blue and yellow' for it's ultra-minimal jacket. Within it's 48 minute run time, the seeds of post-punk, avant rock, noise rock and post-rock can be found. Formed in Brixton, a multicultural, and - at the time - down-at-heel part of south London, This Heat were born into a music scene in rapid flux, first thanks to the punk explosion and then via new wave and it's myriad offshoots into pop, rock and art-rock. But while many sought to apply punk attitude to chart-friendly sounds, This Heat were concocting some of the most experimental ideas ever committed to tape, taking influence from musique concrĂ¨te, krautrock, the burgeoning industrial scene and even the dub reggae blasting out in their home borough. Their debut album had - for the time and for the DIY scene - an unusually long gestation, recorded in sessions between February 1976 and September 1978 in a variety of studios including their own Cold Storage, a converted cold storage room in the Acme Studios complex. Innovating throughout, they combined loops and tape manipulation with live performance and haunting vocals to a complex, dissonant whole. The band recorded everything they ever did - including gigs - and tracks such as "Water" were entirely improvised in the studio. Given the difficult, abrasive, and involved nature of their sound, This Heat never found anything approaching mainstream success, but patronage by the influential Radio 1 DJ John Peel meant they reached a national audience - whether that audience was ready for them or not. Celebrating This Heat's 40th anniversary in 2016, Modern Classics Recordings will re-issue the band's catalog - 1979's This Heat, 1980's Health and Efficiency, and 1981's Deceit - with full co-operation of surviving members Charles Bullen and Charles Hayward. Four decades on, the tireless efforts of This Heat's process can once again be a revelation for new audiences.