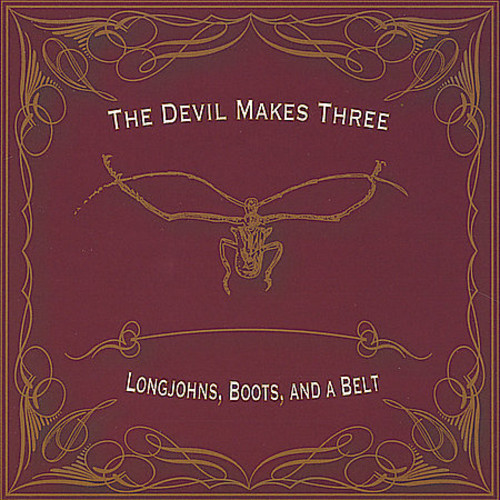 Longjohns Boots & A Belt
Artist: The Devil Makes Three
Format: CD
New: Not on Hand, Let us get it for you
Wish

We are proud to present our second album, 'Lonjohns, Boots, and a Belt. Ten new songs of that weird acoustic ragtime/country/punk thing you have come to know and love. We have more finger-picking wizardry (at least WE like to think so!), more doghouse bass, plus our new friends the tenor banjo and the musical saw. All that put together makes for what we think is a well rounded and pretty darn good album. Give it a listen! Mixing styles from the ragtime and country music of the twenties and thirties to the rock and roll and punk music of their adolescence, The Devil Makes Three pushes the boundaries of acoustic music. Citing influences as varied as Steve Earle, the Reverend Gary Davis, Memphis Jug Band, and Django Reinhardt, the band combines tight vocal harmonies with idiot-savant finger style guitar to create an exciting and original sound. Since releasing their first album in 2002, the band has played to capacity crowds up and down the West Coast, and has shared bills with Robert Earl Keen, Paul Thorn, Drag The River and Lucero. Fast friends since their childhood in rural Vermont, Pete Bernhard (guitar), Lucia Turino (upright bass), and Cooper McBean (guitar, tenor banjo) are currently based in Santa Cruz, CA where they enjoy regular airplay on local radio stations KPIG 107.5, KKUP 91.5, and many others nationwide. The band is currently working on their second full-length album, and is planning to tour extensively over the coming months. If you like The Devil Makes Three Pete Bernhard also has a solo album for sale on cdbaby. Cdbaby.com/CD/bernhard. REVIEWS 'This acoustic trio bridge different musical eras without the camp common in nostalgic sounds, nor do they coast on clichés. Soulful roots music instead of 10 carefully calculated reproductions of the past, The Devil Makes Three is a deviant middle finger to all Johnny-come-lately bluegrass listeners.' -Punk Planet #56 'The songwriting is at times as captivating as a good ghost story told around a campfire, with Bernhard's persona straddling the line between the grand tradition of the gritty, whiskey-swilling depressives of yore and your modern day barfly, with a scratchy, scrappy vocal style.' -Mike Connor, Santa Cruz Metro ' The group's music cuts a wide swath that touches everyone from their hipster contemporaries to grannies here and yon.... It's folk, but a mean kind of jug-band folk, spiked with whiskey and dust.' -Wallace Baine, Santa Cruz Sentinel.