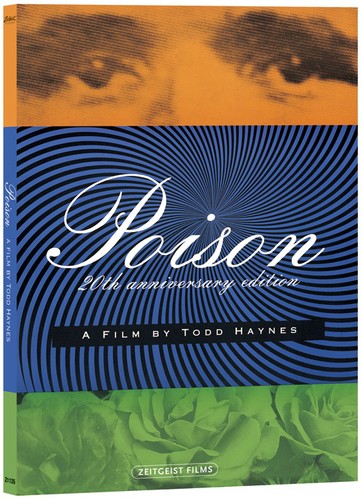 From the Oscar-nominated director of Far from Heaven, I'm Not There and the HBO mini-series Mildred Pierce, this controversial masterpiece is the most fervently debated film of the 1990s and a trailblazing landmark of Queer Cinema. Todd Haynes' first feature-following the underground short sensation Superstar: The Karen Carpenter Story-this groundbreaking American indie is a thrilling work of immense visual invention. Inspired by the writings of Jean Genet, Poison deftly interweaves a trio of transgressive tales-"Hero," "Horror" and "Homo" that build toward a devastating climax. "Hero," shot in a mock tabloid-TV style, tells a bizarre story of suburban patricide and a miraculous flight from justice; "Horror," filmed like a delirious '50s B-movie melodrama, is a gothic tale of a mad sex experiment which unleashes a disfiguring plague; while "Homo" explores the obsessive sexual relationship between two prison inmates. A runaway hit which made national headlines when it was attacked by conservative figures including Dick Armey, Ralph Reed and minister Donald Wildmon, Poison is audacious, unforgettable and thoroughly entertaining.
This website uses cookies to personalize content and analyse traffic in order to offer you a better experience.
I accept Learn More
back to top