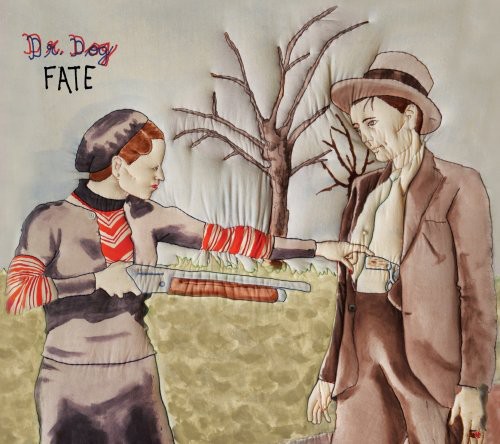 Fate
Artist: Dr. Dog
Format: CD
New: Not on Hand, Let us get it for you
Wish

Fate sees the Philadelphia-based quintet filtering the gamut of American popular music into its own idiosyncratic brand of blue-eyed, dilated pupil soul. As ever, Dr. Dog makes magic from an enduring pop palette of intricate harmonies, shape-shifting melodies, and ramshackle audio ingenuity - all presented through the band's slightly skewed and utterly individualistic outlook.

''Fate'' is the fifth album by indie rock band Dr. Dog. It was released on July 22, 2008. The album introduces some new studio elements to their established indie rock sound.

Pre-orders from the album, depending on where it was pre-ordered, included signed CD art, a signed or unsigned 7" with two new songs ('The Dearly Departed' and 'Is It Worth My Time'), stickers, posters, t-shirts, and the album on vinyl.

The cover art is directly inspired by a picture of, ill-fated outlaw duo, Bonnie and Clyde.

The song "My Friend" was featured in trailers for the Judd Apatow film ''Funny People''. - Wikipedia