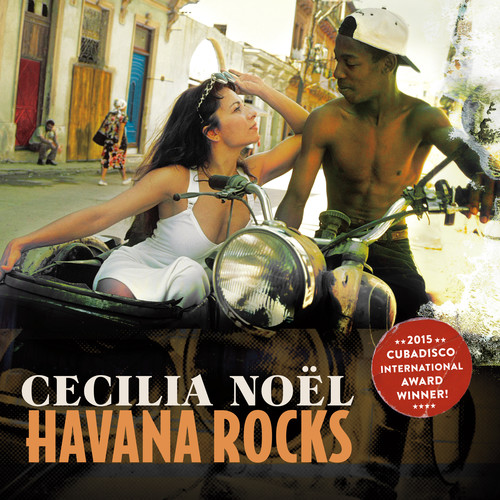 The passionate Cecilia Noėl returns with her newest album, Havana Rocks, a Latin-infused collection of American classics recorded in Havana Cuba, with special permission from the US Government, with an all Cuban cast of musicians and singers. Together, Noėl and crew combine elements of salsa, soul, jazz, funk, and afro-cuban music to deliver an infectious Latin takes on 80's classic rock 'n roll hits. The album includes covers of Devo's Whip It, Gary Numan's Cars and ACDC's You Shook Me, all propelled by deep percussive grooves and Noėl's rich and appealing alto vocals. Says Noėl of her style, I call what I do 'hardcore salsa' because nowadays there is a lot of romantic salsa but I'm more of a punk salsa singer.

Originally from Lima, Perú, Noël was discovered by Stan Getz and moved to New York City, briefly performing as a dancer with Jo Jo's Dance Factory and Menudo. In 1989, she relocated to Los Angeles and became involved in the local music scene. She formed Cecilia Noël and The Wild Clams, a James Brown meets Pérez Prado type band, which received instant acclaim for their explosive live shows and frequent bookings at the House of Blues and the Playboy Jazz Festival. In 2009 Noël released A Gozár! (Compass Records), an infectious set of playful 'salsoul' grooves for which Noël is known and which earned Noël a spot on Putumayo's critically-acclaimed Latin Party release in 2010. In addition to her band, Noël also performs and records with husband and former Men At Work front man Colin Hay.