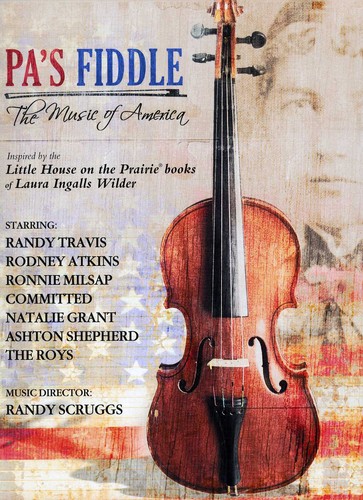 On January 6th, 2012 a concert based on the music written about in the Little House on the Prairie series of books by author Laura Ingalls Wilder, was filmed at the Loveless Barn in Franklin, TN before a live audience, for broadcast by the PBS television network. Artists performing on the concert include award-winning musician and musical director Randy Scruggs and an all-star string band featuring Matt Combs, Dennis Crouch, Chad Cromwell, Hoot Hester and Shad Cobb, along with featured artists Randy Travis, Rodney Atkins, Ronnie Milsap, Ashton Shepherd, the Roys, Natalie Grant and Committed (NBC Sing Off Champions). Dean Butler ("Almanzo" on the Little House on the Prairie TV show) and Dale Cockrell (President of Pa's Fiddle Recordings) have teamed up to produce this unique show that will feature these top-level artists performing and giving their best interpretations of the great American songs and tunes loved by Pa and Laura Ingalls during their lifetime. To commemorate the occasion, a brand new album is now released by Pa's Fiddle Recordings titled Pa's Fiddle: American Fiddler the album, which features songs chronicled in the Little House books, helps place Charles Ingalls among the first rank of old-time fiddlers whose influence is foundational to so much of modern American music. It tells of the power of music to transcend the years, as the "old" songs of Pa Ingalls becomes new again through exciting and dynamic performances by some of the today's finest acoustic musicians. Great American songs on the CD include "Buffalo Gals, " "When Johnny Comes Marching Home, " "Polly Put the Kettle On, " "Life Let US Cherish, " "All the Blue Bonnets, " "Golden Years Are Passing By, " "Boatmen's Dance, " "Mary of the Wild Moor, " "The Campbell's Are Coming, " "Haste to the Wedding, " and more.