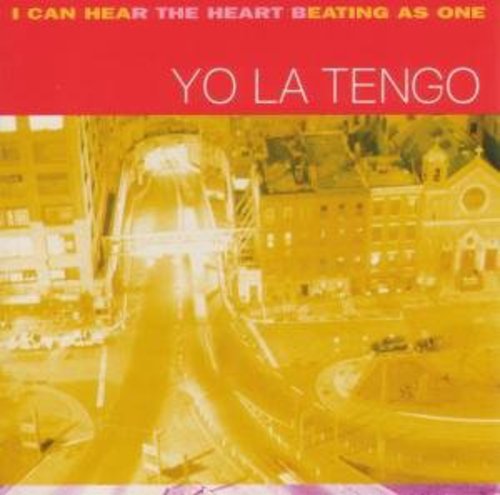 I Can Hear the Heart Beating As One
Artist: Yo La Tengo
Format: CD
New: Not on Hand, Let us get it for you
Wish

Recorded in Nashville, TN with longtime associate Roger Moutenot, I Can Hear the Heart... is the most stylistically diverse album of the band's career, showcasing their continued fascination with sampled sounds and dense atmosphere. While Several of the album's songs like "Sugarcube" or "Shadows" will seem familiar to fans, others like "Autumn Sweater" are light years away from anything else in the rock underground.

''I Can Hear the Heart Beating as One'' is an album by Yo La Tengo. It was recorded in Nashville, Tennessee and mixed in New York City. The album was released on Matador in 1997 and a Deluxe Edition featuring 9 additional songs was released in 2002. A 17th track, "Busy with My Thoughts," appeared on the Japanese version. It is also available on their ''Sugarcube'' 7".

All songs are by Yo La Tengo, except "Little Honda," a Beach Boys tune credited to Wilson/Love, and "My Little Corner of the World," written by Hilliard/Pockriss and made famous by musician and anti-gay activist Anita Bryant.

The CD inlay card parodied the marketing the leaflets that are sometimes inserted into CD cases advertising other albums from the same label. It "advertised" albums by imaginary artists, like "Condo Fucks", "Unsanitary Napkins", "Künstler" in a variety of genres - riot grrrl, college rock, smooth jazz and even stand-up comedy and Broadway musical (with "the soundtrack from ''Heroin!'' performed by the original cast"). In 2008 Yo La Tengo followed up on the joke by releasing ''Fuckbook'', an album of covers credited to the Condo Fucks.

''I Can Hear the Heart Beating as One'' is amongst the most popular albums by Yo La Tengo. The style of music is an eclectic blend of folk, rock, shoegazing, electronic, and what can be widely termed experimental. "My Little Corner of the World" lent its name to the soundtrack of the television show ''Gilmore Girls'', entitled ''Our Little Corner of the World: Music from Gilmore Girls'', where it was featured alongside music by John Lennon, Black Box Recorder, PJ Harvey, and others. - Wikipedia