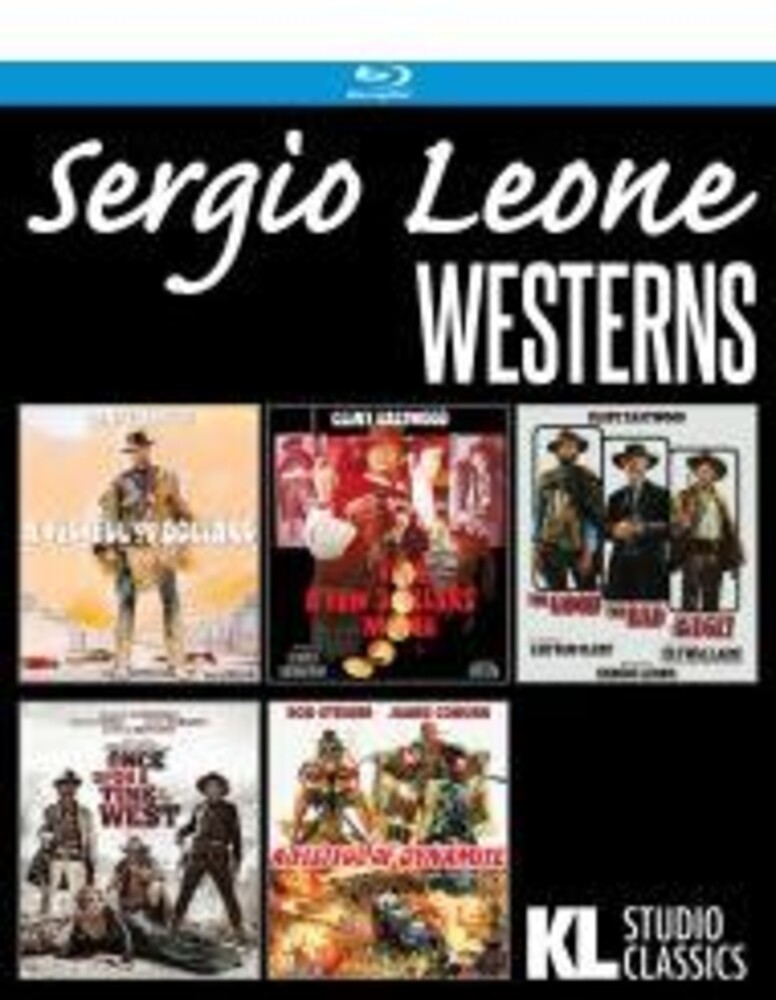 Sergio Leone Westerns
Format: Blu-Ray
New: Not on Hand, Let us get it for you
Wish

Five-disc set includes: A Fistful Of Dollars (1964)Director Sergio Leone reworks Akira Kurosawa's "Yojimbo" into this landmark "spaghetti western" featuring Clint Eastwood in his breakthrough role as "the Man with No Name." Arriving in a frontier town where two criminal families are competing for control, the grizzled gunslinger begins to pit the opposing factions against each other, lining his own pockets in the process. With Marianne Koch, Johnny Wels; features a score by Ennio Morricone. 99 min. C/Rtg: R For A Few Dollars More (1965)Clint Eastwood squints his way to the top in Sergio Leone's slam-bang sequel to "A Fistful of Dollars." This time around, the Man with No Name is on the hunt for a ruthless bandit (Gian Maria Volonté), as is his rival, the brutal wanderer Colonel Mortimer (Lee Van Cleef). Unable to capture their shared foe alone, both men agree to an uneasy partnership in order to get their prey before he gets them. With Klaus Kinski, Mara Krupp. 132 min. C/Rtg: R The Good, The Bad And The Ugly (1966)Highlighted by Ennio Morricone's haunting score and director Sergio Leone's distinctive use of long shots and close-ups, the groundbreaking "Man with No Name" trilogy follows "Blondie" (Clint Eastwood), "Angel Eyes" (Lee Van Cleef), and Tuco (Eli Wallach) as they embark on a quest to find a stash of hidden gold. After forming an uneasy alliance, the trio find themselves facing greed, treachery, and murder as they scramble for the loot. With John Bartha, Luigi Pistilli. 161 min. C/Rtg: R Once Upon A Time In The West (1969)Writer/director Sergio Leone's epic western tale stars Henry Fonda in a chilling role as a ruthless gunman hired by a sinister railroad tycoon to take out anyone who gets in the way of his company's expansion. Claudia Cardinale is a young landowner whose family falls victim to Fonda's bullets, and Jason Robards and Charles Bronson are a pair of outlaws commissioned to bring him to justice. Co-written by Dario Argento; score by Ennio Morricone. 165 min. C/Rtg: PG-13 A Fistful Of Dynamite (Duck, You Sucker) (1971)Raucous frontier saga from director Sergio Leone stars Rod Steiger as a Mexican peasant-turned-bandito who winds up joining forces with an ex-IRA gunrunner and explosives expert (James Coburn) during the Mexican Revolution. Together, both men find themselves immersed in a battle of wills as they struggle to adjust to the rapidly changing world that envelops them. Romolo Valli, Maria Monti, Rik Battaglia co-star. 157 min. C/Rtg: PG Widescreen; Soundtrack: English; Subtitles: English; audio commentary; documentaries; featurettes; interviews; theatrical trailers; radio spots; image galleries; more.