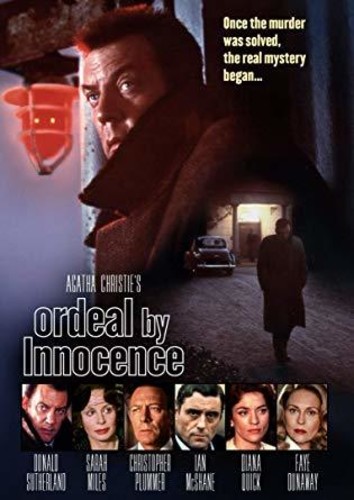 Brand New HD Master - From a 2K Scan of the 35mm interpositive! Screen greats Donald Sutherland (The Great Train Robbery), Faye Dunaway (The Thomas Crown Affair) and Christopher Plummer (The Silent Partner) co-star in Ordeal by Innocence, a sizzling mystery by Agatha Christie (Death on the Nile). After a two-year expedition into Antarctica, Dr. Arthur Calgary (Sutherland) travels back to England to return his friend Jack Argyle's address book, which Jack had left in Arthur's car before his departure. Jack, however, is dead, executed after being framed for murder. Calgary has proof of his innocence; he was with Jack at the time of the murder. But why then does no one wish to reopen the case? Not Jack's father (Plummer), not his secretary (Diana Quick, TV's Brideshead Revisited), not his sister (Sarah Miles, White Mischief) or her husband (Ian McShane, Sexy Beast), not even Inspector Huish (Michael Elphick, The Element of Crime), the policeman in charge. Ordeal by Innocence is one ordeal you're sure to enjoy! Directed by veteran British director Desmond Davis (Girl with Green Eyes, Smashing Time, Clash of the Titans).