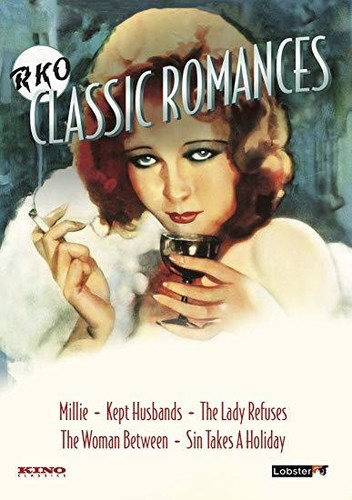 Includes: Sin Takes A Holiday (1930) Constance Bennett is Sylvia Brenner, the secretary of a suave divorce lawyer who marries her to get out of a legal predicament. The marriage pact gives her $5,000 a year and a chance to travel around the world, but while Sylvia's alone on her "honeymoon cruise," she meets and is taken with one of her hubby's pals. Kenneth MacKenna, Basil Rathbone co-star in this pre-Code comedy. 88 min. BW/Rtg: NR Millie (1931) Helen Twelvetrees stars as Millie Maitland, a woman who bounces from man to man after her first love affair goes sour. She shuns the advances of a suave socialite (John Halliday), but once Millie discovers that he's involved with her own 16-year-old daughter (Anita Louise), she sets out to drive a wedge between them. Lilyan Tashman, Joan Blondell, Robert Ames co-star in this superior pre-Code soaper based on the novel by Donald Henderson Clarke. 80 min. BW/Rtg: NR The Lady Refuses (1931) Pre-Code melodrama follows Sir Gerald Courtney (Gilbert Emery), a wealthy socialite, as he tries to get his lovesick son away from a golddigging vamp (Margaret Livingston). After encountering a beautiful but wayward woman (Betty Compson), he decides to fix his son up with her. But when Sir Gerald falls for her instead, it sets in motion a bizarre love triangle. Ivan Lebedeff, John Darrow co-star. 71 min. BW/Rtg: NR The Woman Between (1931) In this drama, Lily Damita delivers a powerhouse performance as Julie Whitcomb, a woman who falls for a suitor (Lester Vail) during a voyage back to New York City from Europe. Once back in the United States, Julie works at her boutique and tries to break off her romance with him. But when fate causes her to unknowingly fall for her own stepson, both of their lives are thrown into turmoil. With O.P. Heggie, Miriam Seeger. 73 min. BW/Rtg: NR Kept Husbands (1931) After Dick Brunton (Joel McCrea), a blue-collar steelworker, saves the lives of two co-workers, the socialite daughter of his boss falls for him and tries to make him more refined. But when he becomes unable to deal with his newfound status as a member of the upper-crust, he is forced to face the truth about his relationship. Pre-Code drama co-stars Dorothy Mackaill, Ned Sparks; directed by Lloyd Bacon ("The Fighting Sullivans"). 76 min. BW/Rtg: NR