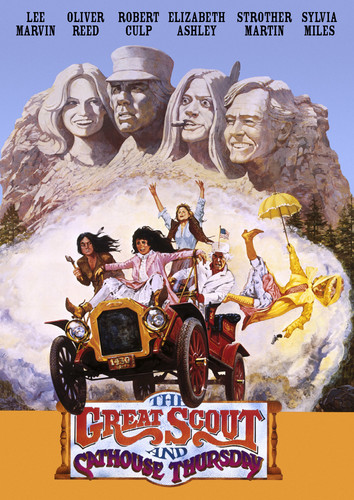 They weren't forgotten by history... they were left out on purpose! Screen legend Lee Marvin (Prime Cut, Monte Walsh) is Great Scout, Kay Lenz (The Passage) is Cathouse Thursday and with a little help from their friends (and enemies), including Oliver Reed (The Hunting Party), Robert Culp (Hickey & Boggs), Sylvia Miles (92 in the Shade), Strother Martin (Cool Hand Luke) and Elizabeth Ashley (Golden Needles), they're out to take over the lusty world of modern Colorado in 1908. In this ribald adventure, Marvin (as a leathery frontier scout) and Reed (as his half-breed partner) try to recover $60,000 stolen by their arch enemy Culp. Instead they end up saddle-bagged with a bevy of Wild West prostitutes all named for the days of the week, one almost-virtuous young lady named Thursday, and an acid-tongued ex-sweetheart (Ashley). The stage is set for some big complications as this colorful group takes on the tycoons, madams and the effects of modern times. Actor turned director Don Taylor (The Island of Dr. Moreau, Damien: Omen II) directed this rip-roaring comedy western.