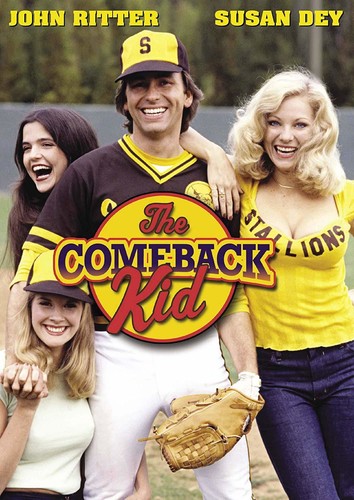 A story for anybody who's ever dreamed of being somebody! TV legend John Ritter (Three's Company, Leave Yesterday Behind) is Bubba Newman, a major-league baseball player who has just been dropped by his big-league team and has his dream of glory and stardom taken away from him. He meets Megan Barrett (Susan Dey, TV's The Partridge Family and L.A. Law), a supervisor of playground activities for the city, who asks him to coach a team of youngsters. But when Bubba finds out these are not your average children, but a group of tough and street-wise kids who don t trust anyone, he realizes he has more on his plate than he originally intended and to complicate matters more, he starts having a love-hate relationship with Megan. The Comeback Kid is a warm human drama full of action and high-spirited fun. It s a story of dreams, youth and hope... a story that will steal your heart away. James Gregory (The Manchurian Candidate), Dick O Neill (The Taking of Pelham One Two Three), Michael Lembeck (The In-Laws), Kim Fields (TV's The Facts of Life and Living Single) and Patrick Swayze (Ghost) lead the wonderful supporting cast.