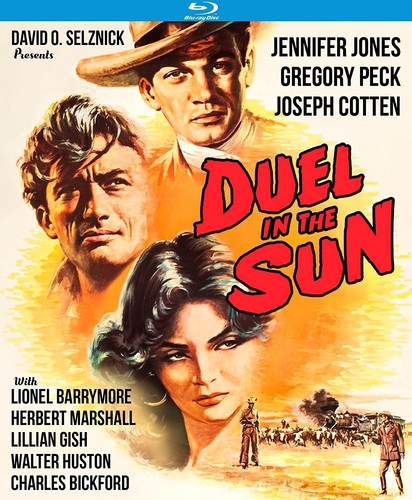 Duel in the Sun
Format: Blu-Ray
New: Not on Hand, Let us get it for you
Wish

From David O. Selznick, the acclaimed producer of Gone with the Wind comes a torrid tale of passion and romance that's loaded with all the sweep and panache of a giant American action movie. Flawlessly cast with a bevy of film legends, including Jennifer Jones (Portrait of Jennie), Gregory Peck (The Paradine Case) Joseph Cotten (Since You Went Away), Lionel Barrymore (Key Largo), Herbert Marshall (The Little Foxes) and Lillian Gish (The Unforgiven), this salacious saga is virtually impossible not to love. When her father is hanged for killing his wife, the stunning beauty Pearl (Jones) is taken in by a wealthy Texan, his wife and their two grown sons (Peck and Cotten). But Pearl soon becomes trapped in an emotional tug-of-war between her love for one son and her lust for the other, igniting the most tempestuous triangle the West has ever seen. This is Roadshow Edition of the glorious Technicolor masterpiece was directed by King Vidor (Ruby Gentry) and co-starred Walter Huston (The Treasure of Sierra Madre) and Charles Bickford (The Big Country), featuring narration by the great Orson Welles (The Stranger). Duel in the Sun was nominated for 2 Academy Awardsr - Best Actress in a Leading Role (Jones) and Best Actress in a Supporting Role (Gish).