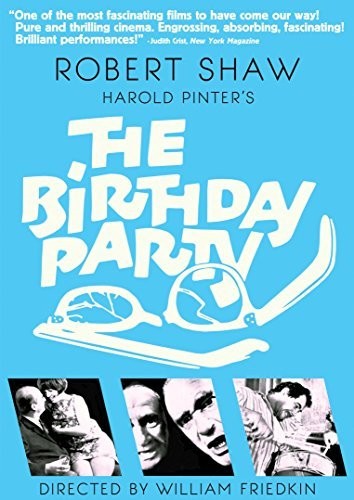 The Birthday Party was originally presented on stage in London in 1958 Legendary playwright Harold Pinter (The Homecoming) became an overnight sensation and is now recognized as one of the greatest talents in contemporary English literature. The Birthday Party has been described as a comedy of menace... a dramatic exposé of contemporary man s inability to cope with his fears and guilt. The story centers around a shabby seaside boarding house in England where a seemingly inane and trivial conversation suddenly transforms from humorous to terrifying. The second feature film directed by the great William Friedkin (The Exorcist, The French Connection) stars Robert Shaw (Figures in a Landscape, The Taking of Pelham One Two Three) and Patrick Magee (A Clockwork Orange, Barry Lyndon).