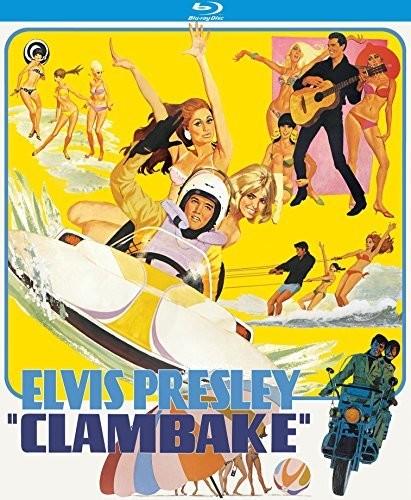 Clambake
Format: Blu-Ray
New: Not on Hand, Let us get it for you
Wish

Rock n Roll legend Elvis Presley (Frankie and Johnny) sizzles as a lovelorn million-heir in this riveting and romantic musical romp with eight original Elvis tunes. Vying for the attentions of the lovely Shelley Fabares (Girl Happy, Spinout), Elvis finds himself caught up in a rivalry with playboy Bill Bixby (TV s The Incredible Hulk) against a tuneful background of comedy, romance and speedboat racing. Clambake is pleasing escape entertainment and the wildest party to hit the beach since they invented the beach ball. It's a hip version of The Prince and the Pauper as Elvis relinquishes his oil baron father's fortune and trades identities with a penniless water ski instructor (Will Hutchins, TV s Sugerfoot) to learn about life from the bottom up. Short on cash but long on determination, he repairs a radically designed powerboat in order to win the regatta and the affection of a girl who's determined to marry rich. Gary Merrill (All About Eve) co-stars in this fun-filled comedy musical.