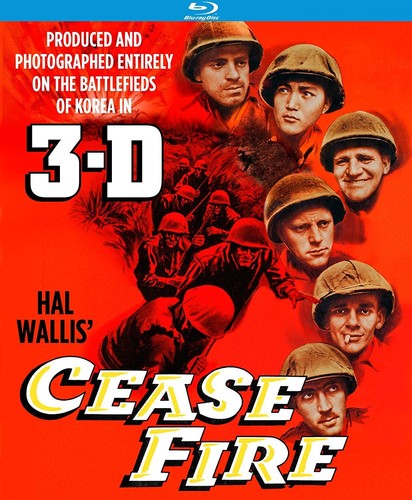 Newly Restored in HD and 3-D from 2K Scans! One of the most unusual 3-D movies ever made, Cease Fire! Began as an idea by director Owen Crump, who in the 40s scripted military-themed short films for Warner Brothers and later on produced the documentary short One Who Came Back, about the air evacuation of wounded U.S. soldiers who fought in the Korean War. Crump approached producer Hal B. Wallis (Casablanca), an old friend from his Warner Brothers days with his concept for Cease Fire! Most 3-D movies of the era used the format to accentuate and exaggerate artifice. Cease Fire! #is the rare production to employ the stereoscopic process to heighten reality, emphasizing the brutality of combat, the vastness of a cold, unfamiliar terrain and the isolation felt by a patrol of valiant fighting men. Part documentary, part drama and part cinĂ©ma vĂ©ritĂ©, Cease Fire! #still remains a unique and remarkable achievement in filmmaking. Cease Fire! #was restored by the 3-D Film Archive.