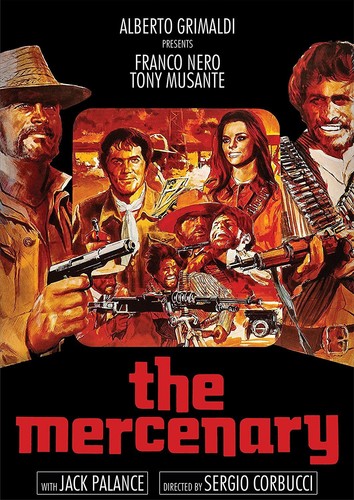 He Sells Death to the Highest Bidder! Sergei The Polish Kowalski (Franco Nero, Django, Companeros), a mercenary who's only out for himself and a few dollars, joins up with a Mexican peasant-turned-revolutionary, Paco Roman (Tony Musante, The Grissom Gang) to rob a silver mine in Texas. No longer content to toil for the rich and powerful, Roman plans to bring a new order to Mexico by force with his small ragtag gang. While Roman and Kowalski are outnumbered facing the Mexican army, they also have to contend with Curly (Jack Palance, Ten Seconds to Hell), a vengeful killer out for blood. Top-notch direction by Sergio Corbucci (Navajo Joe) and score by the great Ennio Morricone (For a Few Dollars More) helped make The Mercenary one the best spaghetti westerns ever made. Co-starring the beautiful Giovanna Ralli (Cannon for Cordoba).