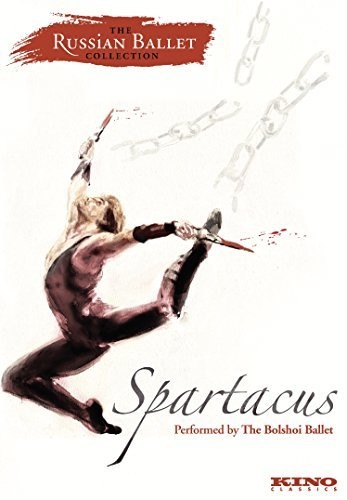 Russian Ballet: Spartacus
Artist: Tatiana Golikova
Format: DVD
New: Not on Hand, Let us get it for you
Wish

Russian Ballet: Spartacus (DVD) Spartacus, with it's storming athleticism, bold story and passionate music, is considered a signature ballet of the Bolshoi Ballet. The gladiator Sparatcus is probably the most physically demanding male role ever created in ballet, full of phenomenal jumps, dramatic solos and melting love duets, including acrobatic lifts never before seen in ballet. In imperial Rome, vividly designed by Simon Virsaladze, the cruel emperor Crassus parades his conquered slaves, among them Spartacus and Phrygia. Crassus seizes Phrygia for his pleasure, to the fury of his mistress Aegina. Spartacus inspires the Roman people to join him in overthrowing the dictator. As the rebels gain the upper hand, Aegina uses her seductive wiles to intoxicate Spartacus's troops and betray him. He dies a spectacular death as Phrygia mourns on behalf of all those who fight for freedom. This 1979 live performance film, digitally restored and remastered to HD quality, is a precious document of the fabulous Vladimir Vasiliev and Ekaterina Maximova returning to their original roles as Spartacus and Phrygia. Mikhail Gabovich is Crassus and Tatiana Golikova the wily Aegina. Algis Zhuraytis conducts Khachaturian's famous score. Number of discs: 1 Run Time: 133 minutes /fullscreen.