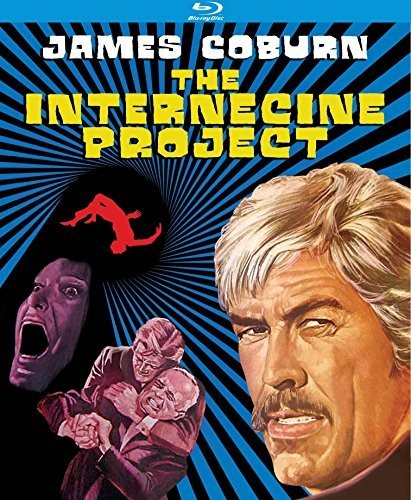 Hollywood legend James Coburn (Harry in Your Pocket) stars as Robert Elliot, a former secret agent given the job opportunity of a lifetime: adviser to the President of the United States. However, he has some skeletons in his closet that need eliminating, namely the four people aware of his shady past. Elliot hatches a diabolical plot to get rid of his targets in one night, with no ties leading back to him... The Internecine Project is a nerve-shattering thriller that will grip you in suspense until the unpredictable surprise ending. The stellar cast includes Lee Grant (Damien: The Omen II), Harry Andrews (Too Late the Hero), Ian Hendry (Get Carter), Julian Glover (For Your Eyes Only) and Keenan Wynn (The Mechanic). Written by Jonathan Lynn (Clue) and Barry Levinson (Who?) and directed by Ken Hughes (Chitty Chitty Bang Bang). Featuring a rousing score by the great Roy Budd (Get Carter, The Stone Killer, The Destructors) and stunningly shot by two-time Oscar winning Cinematographer Geoffrey Unsworth (Cabaret, 2001: A Space Odyssey).