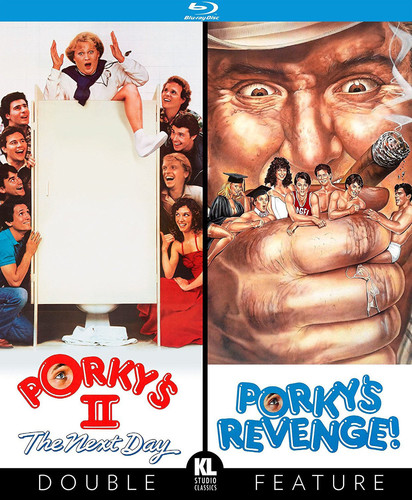 Porky s II: The Next Day - Bob Clark (A Christmas Story) co-wrote and directed this sequel to his own box office smash, Porky s. Proving they haven't matured a bit since the original, much of the cast is back to take on bigots, religious fanatics and double-talking politicians. Count on more delicious revenge for the gym teacher everyone loves to hate and outrageous antics that never enter the realm of good taste. Porky s Revenge - When Meat (Tony Ganios, The Wanderers) picks up a buxom babe, the gang discovers that Porky's is back in business - and that the babe is Porky's daughter. But when her father kidnaps Meat, forcing him into a shotgun wedding, the boys set out to save their friend and shut down Porky's for good. Both films star Dan Monahan (Up the Creek) as everyone s favorite nerd Pee Wee Morris.