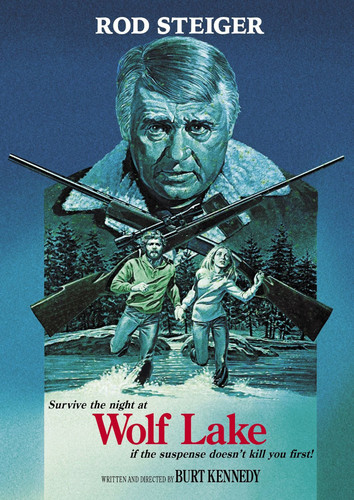 Screen legend Rod Steiger (In the Heat of the Night) heads a powerful cast in this violent and bloody clash between a WWII veteran and Vietnam army deserter. Steiger plays Charlie, an ex-Marine who lost his only son in the Vietnam War. He and his friends George (Richard Herd, Trancers), Sweeney (Paul Mantee, Framed) and Wilbur (Jerry Hardin, Cujo) fly to a remote Canadian hunting lodge for their annual outing. There they meet the lodge s new caretaker (David Huffman, Firefox) and his beautiful girlfriend (Robin Mattson, General Hospital). The tension mounts and the hatred slowly builds when Charlie finds out the new caretaker is a deserter. The two men clash as Charlie and his buddies start terrorizing the young couple... playing a sick game of survival. But when David is pushed too far, the hunters become the hunted and surviving the night at Wolf Lake becomes a challenge to all. Written and directed by western legend Burt Kennedy (Support Your Local Sheriff!, Young Billy Young).