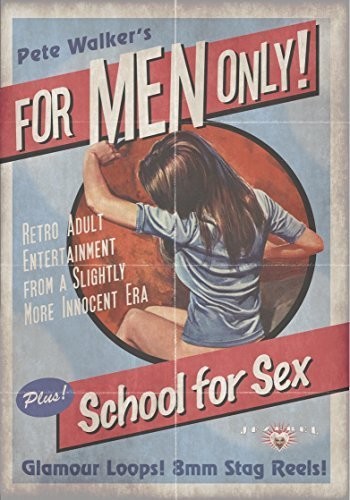 For Men Only / School for Sex
Format: DVD
New: Available to Order $24.95
Wish

"Before becoming the director of some of British cinema's most gruesome horror films (such as Frightmare, Schizo, and The Flesh and Blood Show), Pete Walker was a pioneer of the distinctively British sexploitation genre known as slap and tickle. As the codes of censorship began to relax in the mid-1960s, Walker was among the few enterprising filmmakers brazen enough to cater to the public's appetite for sexploitation, first as a burlesque club comedian, then as the producer of 8mm stag films for the collector's market (visually stark and gritty, but relatively tame by today's standards). Eventually, Walker made the transition to theatrical films, and his long and tumultuous career as a director was set in motion. An extended short, FOR MEN ONLY explores the naughty goings-on behind the scenes at the Puritan Magazine Group, a family-friendly publishing company that hides a tantalizing secret. In SCHOOL FOR SEX a smash hit when it appeared on the screens in London's West End a wealthy playboy (Derek Aylward) opens a finishing school for devious young women. This edition presents the standard UK cut, as well as more explicit nude scenes intended for release in more sexually liberated markets.