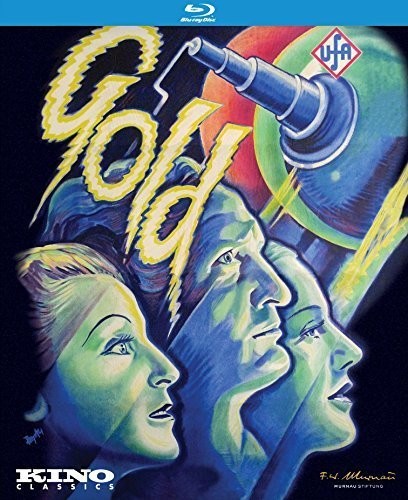 Gold
Format: Blu-Ray
New: Not on Hand, Let us get it for you
Wish

A rare science fiction film made in National Socialist Germany, Karl Hartl's GOLD is a high-tech thriller dramatizing the ongoing war between scientific progress and corporate greed (resurrecting some of the themes and spectacle of Fritz Lang's Metropolis). Hans Albers stars as Professor Holk, an idealistic scientist developing the process of atomic fracturing, constructing an enormous electrical device to transform common lead into gold. When the operation is sabotaged by corporate rivals, resulting in the death of Holk's mentor (Friedrich Kayssler), Holk must accept the backing of a ruthless English businessman, John Wills (Michael Bohnen), whose interest in atomic fracturing is purely economic. Though he makes a deal with the devil, in order to continue his research, Holk recognizes it as a golden opportunity-not for a paycheck, but for payback-and plots to destroy Wills's titanic gold-making machinery. While Holk enacts his revenge, he captures the interest of the millionaire's rebellious daughter (Brigitte Helm, Metropolis), who is enthralled by the scientist's vision and integrity. GOLD is not only a handsomely-produced drama of corporate espionage, it also reveals the ways in which English and American culture was subtly condemned in films made under the Third Reich.