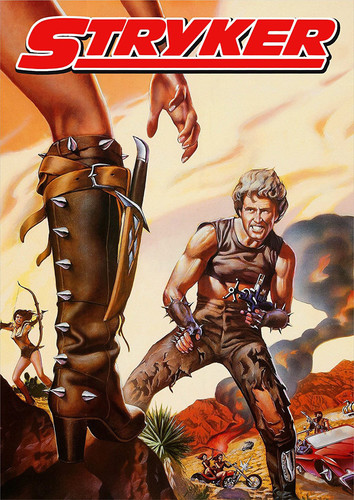 In the future, after the last breakdown of technology there s debris everywhere, but the most devastating consequence of the state of the post apocalyptic world is the shortage of water. Several groups of marauders, men who have banded together for survival on the parched planet, battle each other in raids for water. In the midst of these savages is a group of brave and beautiful women who have made the most important discovery in the world they have located a water source, but soon their source is exposed and the band of savages are determined to take over the water supply at any cost - the women turn to lone road warrior, Stryker (Steve Sandor, Fire and Ice) for help. Stryker was first of seven Cirio H. Santiago (TNT Jackson, Firecracker) post apocalyptic action films, followed by Wheels of Fire (1985), Future Hunters (1986), Equalizer 2000 (1987), The Sisterhood (1988), Dune Warriors (1991) and Riders of the Sun (1992). All produced by Roger Corman (Tales of Terror, Premature Burial) film studios, New World Pictures, Concorde Pictures and New Horizons Pictures.