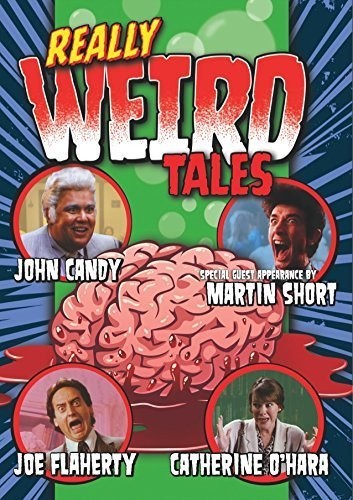 Top comedic talent hits new heights of zaniness in this three-episode parody of classic Sci-Fi shows like The Twilight Zone and The Outer Limits. Joe Flaherty (SCTV, Used Cars) hosts this wonderfully clever, bizarre and delightfully funny Really Weird Tales. (All's Well That Ends Strange) A third-rate lounge performer (Martin Short, ÂˇThree Amigos!) thinks he's made the big time through his friendship with a girlie magazine publisher, but soon he discovers what's really behind those buxom bodies and sexy smiles - Directed by Paul Lynch (Prom Night). (Cursed With Charisma) In the failing town of Fitchville, a mysterious stranger (John Candy, Delirious) stirs things up with a no money down real estate boom, but in his wake come two aliens with plans of their own for the place - Directed by Don McBrearty (Murdoch Mysteries). In (I'll Die Loving), Catherine O'Hara (Home Alone) portrays a woman with a serious problem. Everyone she loves explodes. Will she find a cure, or will all her romances literally go up in smoke? - Directed by John Blanchard (SCTV, The Kids in the Hall).