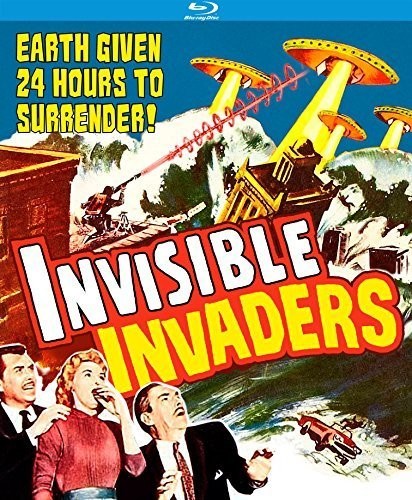 Invisible Invaders (1959) Blu-ray Starring: John Agar, Jean Byron & Philip Tonge Director: Edward L. Cahn - Scientists must find a way to save the human race after creatures from the moon land on Earth and begin inhabiting dead bodies. - In this creepy science fiction-horror film, invisible aliens from the moon attack the earth, while a crew of scientists desperately races against time to stop them. The invaders order everyone on the planet to surrender to them. And, to prove that they mean business, they set off a string of disasters (including fires and floods) around the globe. In addition, they possess corpses, which rise from the grave to kill humans. Meanwhile, scientists John LaMont and Adam Penner hide out in a cave, where they try to come up with a weapon that will destroy the monsters. With them are Penner's daughter Phyllis and Major Bruce Jay, who become romantically involved. As LaMont and Penner feverishly work, the aliens figure out where they are and try to get inside their underground hideout. Will the heroes be able to invent a weapon in time, or are they and the rest of humanity doomed' Additional cast: Philip Tonge (Dr. Adam Penner); Hal Torey (The Farmer); Eden Hartford (WAAF Secretary); and Jack Kenney (Cab Driver). Actor Philip Tonge died shortly after the film was made.