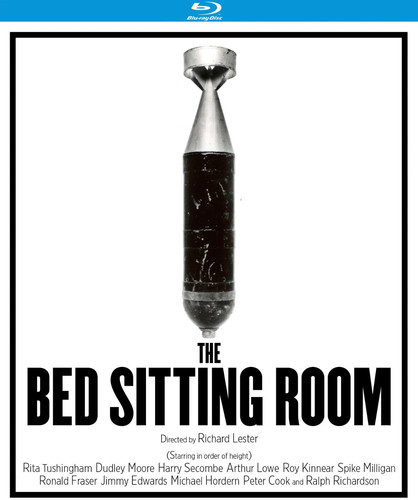 Bed Sitting Room
Format: Blu-Ray
New: Not on Hand, Let us get it for you
Wish

Legendary director Richard Lester (How I Won the War, Juggernaut) joins former members of The Goon Show to create a series of comic sketches about a post-nuclear apocalyptic London: a girl is 17 months pregnant, a father turns into a parrot, a man becomes a chest of drawers and another man - a bed sitting room. The unbelievable cast includes Dudley Moore (Arthur), Peter Cook (Bedazzled), Ralph Richardson (The Fallen Idol), Rita Tushingham (The Knack... and How to Get It), Spike Milligan (Life of Brian), Michael Hordern (A Funny Thing Happened on the Way to the Forum) and Roy Kinnear (Help!). This Hilarious masterpiece was nominated for the Golden Berlin Bear (Best Film) at the 1969 Berlin Film Festival and was beautifully shot by award Winner David Watkin (Out of Africa, Chariots of Fire).