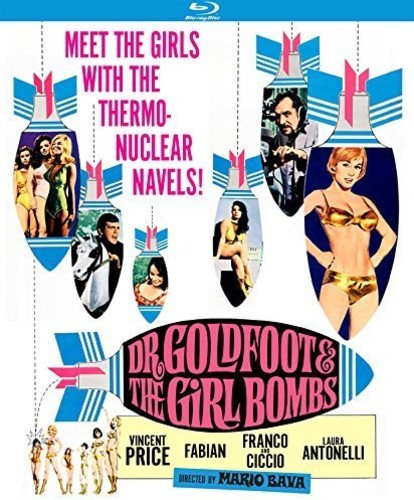 Dr. Goldfoot And The Girl Bombs

Horror legend Mario Bava (Black Sabbath) directs this hilarious sequel to Dr. Goldfoot and the Bikini Machine featuring international superstar duo of Ciccio and Franco (Franco Franchi and Ciccio Ingrassia, War Italian Style). The great Vincent Price (Madhouse) is back as Dr. Goldfoot and no man is safe from his army of irresistible bombshell robots... not even N.A.T.O. generals! Goldfoot's gorgeous robots are loaded with lovemaking explosives - their mission: ignite war between the U.S. and the Soviet Union. Goldfoot is one general shy of global domination and with the ravishing Rosanna (Laura Antonelli, Malicious) as his secret weapon; it's just a matter of time. Now, it's up to secret agent Bill Dexter (Fabian, Thunder Alley) to keep the general and the world safe from the diabolical Dr. Goldfoot and his sexy robots.