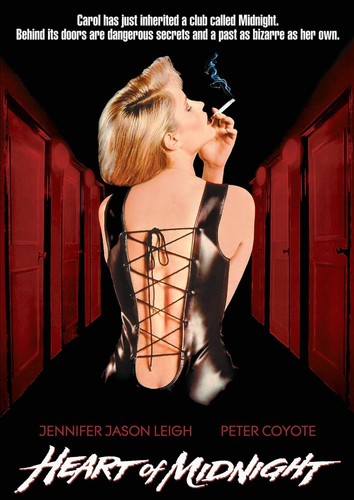 Mastered in HD! At Midnight, the line between love and lust disappears as terror stalks the innocent! Carol (Jennifer Jason Leigh, Rush) has lived on the edge of madness for as long as she can remember. Now she has inherited a run-down nightclub called The Midnight from an uncle she barely remembers, and she seizes the chance to start a new life. But Carol's dream of independence disintegrates into a nightmare, The Club's a lurid trap and something seems to be stalking Carol above the ceiling, under the floorboards, driving her closer and closer to the edge. Is the danger that haunts her real? Or has her mind finally cracked? Only one man (Peter Coyote, Bitter Moon) knows the bizarre secrets that corrupted Carol's past and brought her to this deadly reckoning. Now she must risk her sanity and her life to face the brutal truth that lies at the Heart of Midnight. Written and directed Matthew Chapman (Runaway Jury, Color of Night) with a stellar cast that includes Brenda Vaccaro, Frank Stallone and Steve Buscemi.