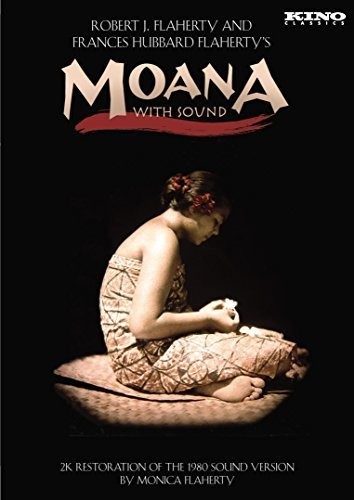 After the triumphant success of his true-life Arctic adventure Nanook of the North (1922), director Robert J. Flaherty journeyed with his wife Frances and their children to the South Seas island of Savai'i to capture on film the exotic lifestyles of the Samoan people. It was in a 1926 review of Moana that the word documentary was first used in a cinematic context (John Grierson commented that the film had documentary value). While Moana may not have been a documentary in the purest sense of the word - the Flahertys cast the leading roles and required them to wear traditional clothing, and restaged certain rituals that had, by 1923, already become obsolete - what the filmmakers achieved was even greater. The Flahertys resurrected the recently vanished customs of the Samoan people while they still lingered in the minds of the elders, and dramatized these struggles for survival just before modernization permanently altered the cultural landscape of the island. In 1975, the Flahertys' daughter Monica ventured back to Savai'i, with documentarian Richard Leacock, to record a new audio track comprised of the sounds of the island and voices in the regional dialect - completed in 1980 and released as Moana With Sound. This edition of Moana With Sound, restored by Bruce Posner and Sami van Ingen (great-grandson of the Flahertys), marks the first time Monica's soundtrack has been married to a pristine 35mm print of Moana and allows the landmark motion picture to be seen - and heard - in it's full glory.