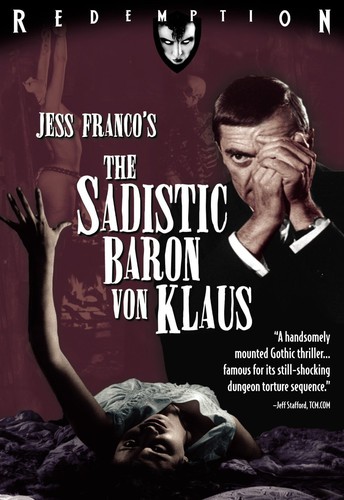 Sadistic Baron Von Klaus
Format: DVD
New: Not on Hand, Let us get it for you
Wish

In this follow-up to his ground-breaking horror film The Awful Dr. Orlof, Jess Franco (Female Vampire, A Virgin Among the Living Dead) continued to lay the foundation of a career defined by fetishistic imagery and transgressive violence. A series of grisly murders in the remote village of Holfen convinces the locals that the town is still cursed by the spirit of a 17th-century baron who maintained an elaborate torture chamber in the dungeon of his estate. Undaunted by the villagers' superstitions, a detective (Georges Rollin) quickly focuses his investigation upon the creepy Max Von Klaus (Howard Vernon). Meanwhile, the youngest male descendent of the Von Klaux bloodline (Hugo Blanco) returns home to mourn the death of his mother, and must wrestle with his own connection to the cursed family history. The Sadistic Baron Von Klaus occupies a significant stage in Franco's evolution as a filmmaker. On one hand, it is a well-produced thriller in the European style (the influence of Carol Reed's The Third Man is apparent throughout). But Franco is clearly interested in stepping outside convention to innovate something of his own, as evidenced by the newly-restored torture dungeon sequence - which cult film historian Tim Lucas (Video Watchdog) called, horror cinema's first sequence of 100-proof erotic horror. It is a sequence that is shocking even today and was, in 1962, an omen of diabolical things to come.