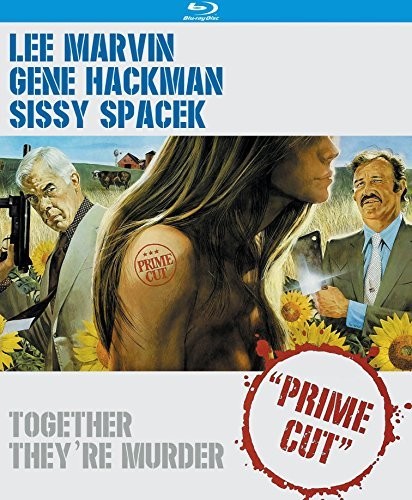 Hollywood legends Lee Marvin (Monte Walsh) and Gene Hackman (The Package) square off in one of the most explosive screen confrontations ever. Marvin is an underworld enforcer sent to Kansas City to collect money from Hackman, a mysterious mobster who has no intention of paying up. A meat packing plant fronts for Hackman's real business dealings: drugs and prostitution. Before it ends, hoods will be ground into sausages and beautiful women will be sold like cattle. Michael Ritchie's breakneck direction propels the action along with the speed of bullets. From a shoot-out at a country fair to the final cataclysmic showdown, Prime Cut is prime excitement! Punctuated with ruthless performances by Marvin and Hackman, and featuring the in-the-flesh screen debut of acting great Sissy Spacek (Carrie), this gangster movie hits hard and cuts deep.