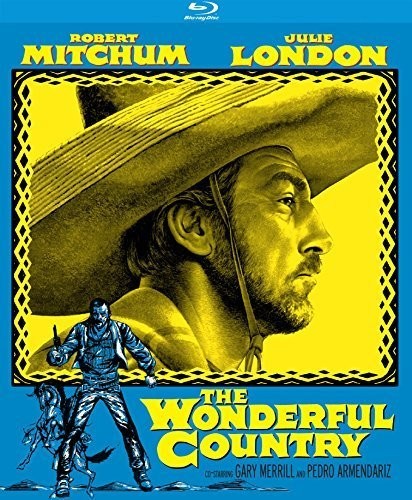 Wonderful Country
Format: Blu-Ray
New: Not on Hand, Let us get it for you
Wish

Having fled to Mexico many years before for killing his father's murderer, Martin Brady (Robert Mitchum, Man with the Gun) travels to Texas to broker an arms deal for his Mexican boss and Governor Castro (Pedro Armendariz, 3 Godfathers). Brady has an accident and the gun shipment he was returning to Mexico is stolen, complicating matters further is the wife (Julie London, Man of the West) of local army major Colton (Gary Merrill, All About Eve) who has designs on Brady and a local Texas Ranger captain (Albert Dekker, The Wild Bunch) who offers Brady a chance to join his outfit. But after killing a man in self-defense, Brady slips back over the border and is confronted by Castro who's unhappy that Brady has lost his guns, but may also join forces with Colton to battle the Apache Indians. Robert Parrish (A Town Called Hell) directed this action-packed western featuring a supporting cast that includes Jack Oakie, Charles McGraw, Anthony Caruso, John Banner, Mike Kellin and Baseball Legend Leroy 'Satchel' Paige.