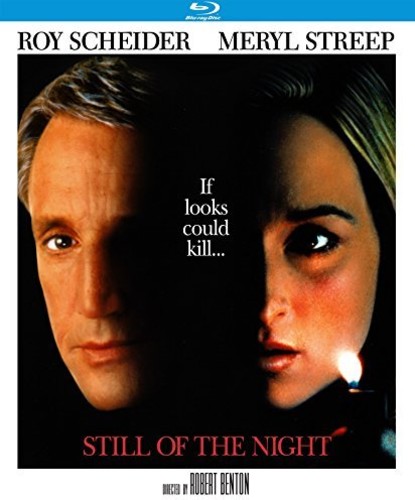 Still Of The Night
Format: Blu-Ray
New: Not on Hand, Let us get it for you
Wish

If looks could kill... Meryl Streep (Silkwood) co-stars in this Hitchcockian murder mystery as the enigmatic Brooke Reynolds. Following the murder of her married lover, she visits the office of his psychiatrist, Dr. Sam Rice (Roy Scheider, Last Embrace, 52 Pick-Up), to leave a wristwatch for the man's wife. Sam is immediately fascinated by the aloof beauty, whom he's come to know through her lover's therapy. When he finds that her father died mysteriously and that she strongly resembles a woman who's been stalking him, the psychiatrist becomes even more obsessed with her. Both fearing and desiring Brooke, he's plagued by nightmares that he'll be her next victim. Striking photography by Nestor Almendros (Days of Heaven) and top-notch direction by screenwriter and director Robert Benton (The Late Show) complement a baroquely twisted plot in this complex, bone-chilling film.