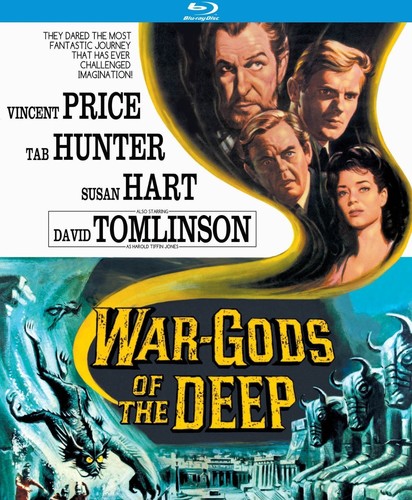 War-Gods Of The Deep / (Rmst Dhd)
Format: Blu-Ray
New: Not on Hand, Let us get it for you
Wish

Newly Re-mastered in HD! They Became Pawns In A War Beneath The Waves! Master of suspense and horror Vincent Price (The Oblong Box) takes on square-jawed Tab Hunter (Damn Yankees!) in this fantastic underwater tale teeming with adventure! Based on an Edgar Allen Poe (Tales of Terror) story and co-starring David Tomlinson (Mary Poppins) and Susan Hart (Dr. Goldfoot and the Bikini Machine), this turbulent thriller pits gill-men against he-men, with a sexy woman caught between and surges with excitement from initial fade-in to climatic fadeout. When a slimy, gilled monster from the deep kidnaps the beautiful Jill (Hart) it'll take her boyfriend (Hunter), his sidekick (Tomlinson) and his sidekick's sidekick - a rooster - to get her back! Following her trail into the deep, they are shocked to discover a lost underwater city, ruled by a ruthless captain (Price) and an army of mutated sea creatures, who imprison the hapless landlubbers... while a restless volcano threatens to bury them all! Directed by the great Jacques Tourneur (I Walked with a Zombie).