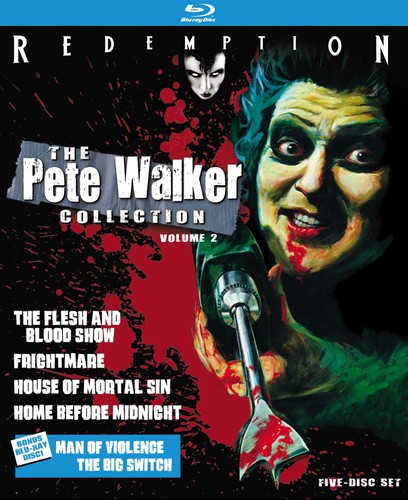 This second anthology of films by Pete Walker reels the provocative director at his most diabolical. Whether skewering highbrow drama (The Flesh and Blood Show), established religion (House of Mortal Sin), or legal hypocrisy (Home Before Midnight) Walker laces his films with a wicked sense of humor and healthy dollops of sex and violence. One perfect example is the legendary shocker Frightmare, which stars aging British actress Sheila Keith as a fortune-teller-slash-cannibal in the English countryside. Also featured in this collection are two of Walker's early works: Man of Violence (aka Moon) and the Big Switch, which clearly foreshadow the taste for the perverse (and the flair for cynical humor) that would later become his hallmarks.