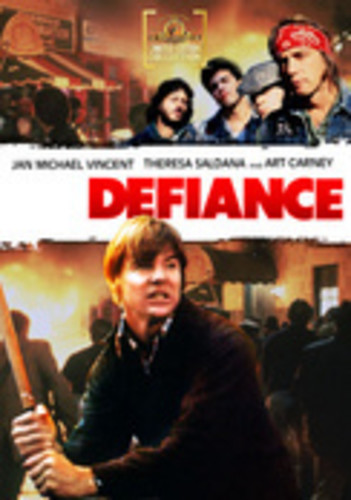 Defiance
Artist: Defiance
Format: Blu-Ray
New: Not on Hand, Let us get it for you
Wish

Blu-Ray. Action veteran John Flynn (Rolling Thunder) directed this tough-as-nails thriller about a merchant seaman (Jan-Michael Vincent, Vigilante Force) taking on a gang of thugs. Merchant mariner Tommy (Vincent) is stuck in New York's tough Lower East Side, waiting for his next ship to sail. He mostly keeps to himself, though he takes a liking to a pretty local woman named Marsha (Theresa Saldana, The Evil That Men Do) and befriends a kid (Fernando Lopez, Frankie and Johnny) and an old veteran (Art Carney, The Late Show). But he also finds the neighborhood plagued by a rough, violent gang called the Souls, led by Angel (Rudy Ramos, Quicksilver). Tommy stands up to the gang, and his behavior encourages others in the neighborhood to fight back against their tormentors. The supporting cast includes Danny Aiello (Fort Apache the Bronx), Frank Pesce (Killer Fish) and Tony Sirico (The Sopranos).