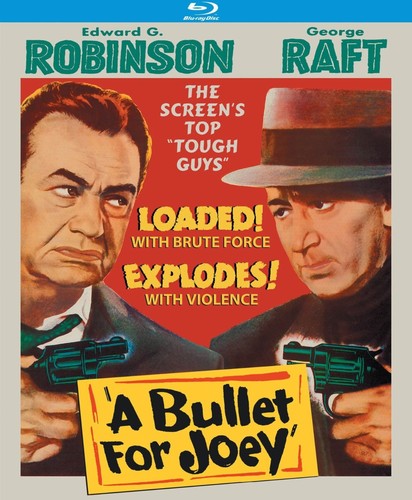 A Bullet for Joey
Format: Blu-Ray
New: Not on Hand, Let us get it for you
Wish

Edward G. Robinson (Scarlet Street) and George Raft (They Drive by Night) star in this espionage thriller that pulls out all the stops for excitement and edge-of-your-seat suspense. When a Canadian police inspector investigates a murder, he is hurtled into an adventure involving foreign spies, American gangsters and an explosive high-tech secret that could change the world. In a daring attempt to seize a brilliant physicist's discoveries, a foreign superpower enlists mobster Joe Victor (Raft) and his gang in a scheme that will ignite a firestorm of betrayal, murder and global intrigue. Police Inspector Leduc (Robinson) is closing in, but the gangsters bring in their ultimate weapon: the stunning Joyce (Audrey Trotter, The Set-Up), a blonde temptress who will teach the scientist a thing or two even he doesn't know! The breathtaking chase leads through the city streets to a pulse-pounding confrontation aboard an enemy cargo ship. Crackling with unrelenting tension, clever twists and a rapid-fire pace that will have you enthralled until the final action-packed moments, A Bullet For Joey is an adventure of the highest caliber with top-notch direction by the great Lewis Allen (Suddenly).